If the idea of heading on an off-roading motorbike adventure is enough to get your heart beating a little faster, you’re going to need an off-road motorbike as your average sportbike is just not going to cover it.

What you need is a bike designed specifically for the rough terrain you’re going to encounter, to keep both you and your bike in one piece. Here are the best off-road motorbikes of 2018.

With a motor that’s origins can be traced back to Italian Husqvarna engineers (before KTM and BMW got involved), the AJP PR7 Rally’s chassis was designed in Portugal and the rest of the components were sourced all over Europe – a truly multi-cultural motorbike!

The result is a 600cc rally beast designed purely for racing.

The 530 FI ES is a 528cc savage and proof that TM still offers a true open-class endure bike. Based on the 450, the 530 FI ES has a 3mm-larger bore and a 6.6mm-longer stroke, but both bikes are fuel injected with an electric starter.

Handmade in Italy with aluminium frames like all TMs, the shocks of the 530 FI ES are made in-house, while the fork is a KYB.

While the standard Beta RR four-strokes have made the transition to legitimate dual-sport bikes, the 480 RR & 430 RR Race Editions are designed with the ultimate off-road adventurer in mind and will get your heart racing just like horse racing betting!

With upgraded suspension, stripped of the DOT equipment, and new clutches, the 480 and 430 are identical apart from displacement.

Christini has engineered an authentic two-wheel-drive system which is both lightweight and inconspicuous and incorporated it on an Asian-made, electric-start 450 four-stroke which bears an uncanny resemblance to the Honda CRF450X.

Featuring WP suspension and fuel injection in standard, the AWD 450E is also available with a Keihin FCR carburettor. 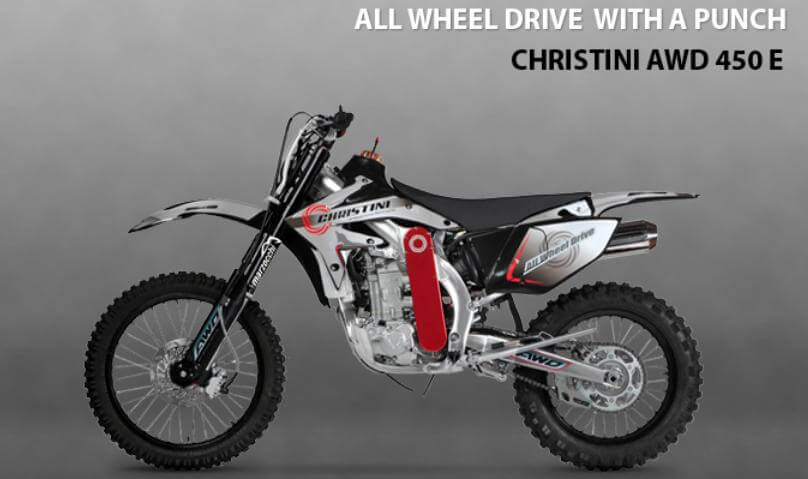 Similar to the MX in most ways, the off-road version of the Honda CRF450 has a softer suspension, a larger fuel tank of 8.3L, and a different EFI setting to provide smoother power delivery.

Considered a closed-course competition bike, the CRF450RX comes standard with a kickstand and an 18-inch rear wheel with a Dunlop Geomax AT81 tyre.

While there appears to be not much difference between the Husqvarna FX450 and its motocross equivalent the FC450, the FX has softer suspension settings, a larger fuel tank, a kickstand, and an 18-inch rear wheel.

Similar to the MX, the FX suspension parts are WP shocks and a WP AER 48 fork, while the gear ratios are almost identical.

The company’s four-stroke off-road efforts were then left to the 450XC-F and while it’s almost identical to the 450SX-F motocross bike, the 450XC-F has a softer suspension, a larger fuel tank at 8.5L, a kickstand, and an 18-inch rear wheel.